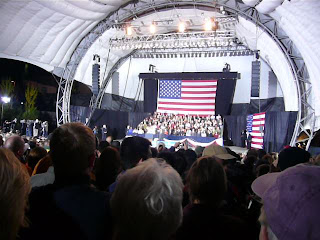 This past Friday, President Obama came to Charlottesville, Virginia, to campaign for freshman House Democrat Tom Perriello.  Perriello has been widely cited as an example of a Democrat who isn’t running away from the Obama White House – a difficult position in a largely conservative district.  Perriello’s “yes” vote on health care was tough for a Democrat who won his initial election in 2008 by just over 700 votes, in a district that John McCain took by over 7000 (only 49 Democrats were elected from McCain districts, of whom only 20 voted for the healthcare bill, and only 17 are running for re-election to the House).
Although Perriello points to his vote against the president’s budget as evidence of his independence and fiscal responsibility, it’s a difficult line to walk.

Obama’s visit stirred up lots of discussion as to whether this will play well for Perriello – firing up his base and possibly carrying him over the finish line – or backfire badly, solidifying in pictures like these the Obama connection that has many voters turned off this election cycle.
The event generated a big crowd – with massive lines to get in – and they certainly seemed to be energized.  Obama spoke for over half an hour, and seemed genuinely supportive of Perriello – not just that he had been parachuted in to help a Democrat in need.  He hit on all the main campaign themes – change takes time and effort, Republicans are divisive and unwilling to work with Democrats, they failed last time and I’m still cleaning up the mess etc.  He also emphasized the most popular aspects of the healthcare bill – preventing discrimination on the basis of pre-existing conditions and the ability to stay on your parents insurance until the age of 26 (something that drew applause from the many students in the audience) – and also seemed less defensive about the legislation than he has in other forums recently.

Ultimately, Obama is great in these kinds of campaign settings – his speech was well put together, impressively delivered, and energizing for those present.  The problem, however, was that those present were mostly strong Obama/Perriello/Democratic supporters who were likely to go out and vote anyway, so the critical questions are whether the event had an energizing event more broadly and managed to avoid a backlash.


“found that the Republican is leading with 45, Perriello's at 42, and the third party candidate is, is at 6.  And more people said they were less likely to support Perriello because the president was there than more likely, so they believe it didn't have a huge effect.”
Only one more day and we will know for sure…
(You can see the transcript of the October 31, 2010 “Meet the Press” show here!
Update: Rally to Restore Sanity And/Or Fear

As expected, the rally drew a big crowd and provided the audience with some big name performers.  Highlights include Stewart and Colbert’s duet and the “[insert the blank] train” song medley – featuring Yusuf Islam, Ozzy Osborne, and the O-Jay’s.  If that doesn’t show that unexpected combinations can work together, I don’t know what can!
I didn’t get to the rally itself, watching it live instead (thank you CSPAN!), but my impression was that, at times, it felt less like a rally and more like just a special crossover show – like when Gray’s Anatomy and Private Practice get together – only funnier.  Stewart got serious at the end, with a message about the need to disagree agreeably, and a heavy critique of both political parties and the news media – in terms of fostering division and negativity.  These are easy targets and it’s not clear that there are obvious or immediate solutions – for their part, Stewart and Colbert did not pretend to have all the answers, but exhorted those present to adopt a different attitude, and go from there.
Despite speculation as to the Democratic advantage that might accrue from the event, it doesn’t seem that really happened – with reporters observing signs and a general sentiment that seem to be exasperated with both parties. Bottom line, it’s hard to “rally” people with a message of moderation, but Stewart and Colbert tried.  Given that those with a less moderate message are already energized, however, it doesn’t seem this will make that big of a difference to the election, or the discourse surrounding politics right now.
You can watch the whole rally here!
Emily Jane Charnock, University of Virginia, Charlottesville, VA.
Lagt inn av H.E.R. kl. 10:11