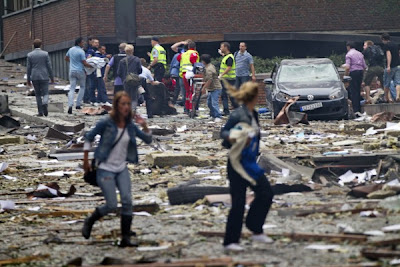 I hesitate to write this, because I am still in shock. People in shock often do or say things they would not do or say were they calm and collected. But I feel a need to write something about this weekend of horror, and to do so in English in order to communicate with my friends and unknown friends in the United States (and anywhere in the world, really).

I am sitting in my office at the moment, which is directly next to Oslo Court House where Anders Behring Breivik (ABB) is currently being processed for jail. (The crowd waiting just roared when his car passed by. It was not a nice roar.) The next street above Oslo Court House is Regjeringskvartalet ("government quarters") where he set off a bomb so powerful that I heard it loud and clear in my apartment Friday afternoon, which is a 15 minute metro ride away. Thankfully, I was not in my office on Friday (really, what was this guy thinking, targeting government buildings on a Friday afternoon in July? Every Norwegian will be on vacation then. Long live Labor Party policies!) and few people were working at the government offices, but still enough for there to be a devastating death and injury toll.

Of course, the Oklahoma City style-bomb was merely a distraction. The real target, we now know, was Utøya, a tiny island about a 30 minutes' drive outside of Oslo, where around 650 Labor Party youth were gathering for their annual summer camp complete with tents, political discussions, and I am sure some summer romances too. 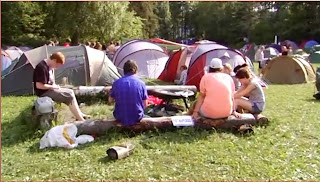 Instead, they were hunted and massacred on an island which had no connection to the mainland except for boats. For over an hour, they were running for their lives, while ABB (dressed in police gear) gunned them down, as if this was some B-rate horror movie. Some of them jumped in the water and swam for their lives toward the mainland. Some made it, others drowned because they couldn't swim anymore, or because they were shot in the water. 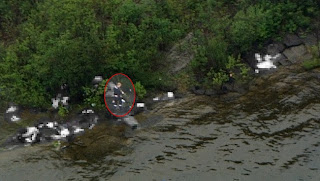 Norwegian reactions:
Immediately after the explosion, the news media was scrambling to understand what was going on. It soon became clear that a large bomb had gone off, and thus several experts on terror were shuttled to the TV studios to give their insight. Several of my good friends and colleagues at the various research institutes in Oslo appeared on TV in those minutes and hours after the explosion, looking just as confused and shattered as I was feeling, glued to the TV in my apartment. To their credit, most of them were extremely cautious in their preliminary analyses. My friend Anders Romarheim at the Norwegian Institute of Defense Studies, for instance, while clearly shocked, was stayed calm and said we could not say anything about who was behind this yet. Anders, just like me and I imagine most Norwegians, initially thought that the bomb targeting a government building meant that Islamic terrorism had reached our shores. ﻿He maintained on air, however, that we could not know who was behind this as of yet. Indeed, Tore Bjørgo of the Police Academy (and also of the Norwegian Institute of International Affairs (NUPI) where I work) said the same thing: we must not draw conclusions hastily.
And once it became clear that the Labor Youth camp was under attack by a white male speaking Norwegian, their refusal to be baited into early conclusions by the news anchors was vindicated.
This was domestic right-wing terrorism.
The Prime Minister Jens Stoltenberg (of the Labor Party)'s reactions were also commendable. While I thought he could have gotten on the phone and spoken to the press a bit sooner than he did, once he held a press conference that afternoon, it was clear he was in control. Since then, he has visited with survivors at Utøya, held a memorial speech at Oslo Cathedral, and hugged and held victims and relatives of victims. 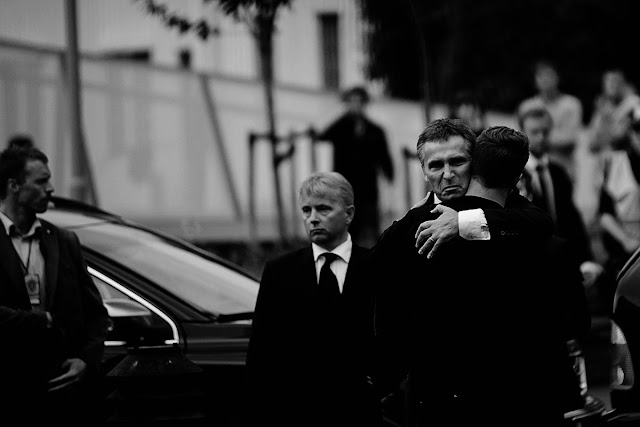 Despite being the very symbol of what ABB was attacking (which was, apparently, the ruling Labor Party's multicultalism policy), Stoltenberg kept his cool. No angry rhetoric. No violent overreaction. No promise of revenge. Rather, Stoltenberg said, "we will retaliate with more democracy, transparency, and openness." ﻿The royal family was living examples of this, as they visited Oslo Cathedral twice this weekend, without any more security than they normally have, with security guards discretely placed in the background. Their open crying at the memorial service Sunday made me, a republican, very moved.
U.S. reactions:
Perhaps the unfortunate New York Times report is the most telling in terms of how the American media reacted, and what kind of effect the "War on Terror" has had on the American psyche. As Glenn Greenwald at Salon has documented, for much of Friday, the featured headline on The New York Times online front page strongly suggested that Muslims were responsible for the attacks on Oslo. Once it became clear this was incorrect, the paper explained why it had made drawn the incorrect conclusion. Reports Greenwald, "There's this extraordinarily revealing passage from the NYT -- first noticed by Richard Silverstein -- explaining why the paper originally reported what it did:
'Initial reports focused on the possibility of Islamic militants, in particular Ansar al-Jihad al-Alami, or Helpers of the Global Jihad, cited by some analysts as claiming responsibility for the attacks. American officials said the group was previously unknown and might not even exist. There was ample reason for concern that terrorists might be responsible.'"

So, terrorism = Muslims. A white Norwegian male cannot be a terrorist, he must be a madman or a lone wolf or something not terrorist related? I fear this is the legacy the ill-conceived "war on terror" has had on the American mental framework.
But not just reputable NYT made the mistake of drawing early conclusions. The Washington Post's Jennifer Rubin wrote a column - still there - linking the attacks in Norway to the war on (Islamic) terror, and - incredibly - the need to keep the U.S. defense budget away from recession cuts. Not until Sunday at 5:15 pm did there appear a link on top of the post alerting readers to an update on the matter where she defends her early conclusion but also admits it was a mistake. She concludes that the U.S. defense budget should stay sheltered from cuts because there are no shortage of threats out in the world, be they lone wolves or "organized jihadists."
Indeed, President Obama also seemed to assume this was an act of Islamic terrorism: "It's a reminder that the entire international community holds a stake in preventing this kind of terror from occurring" and "we have to work cooperatively together both on intelligence and in terms of prevention of these kinds of horrible attacks."
So, President Obama, does this mean you would like to cooperate on rooting out right-wing extremism? I sure hope so.
But, of course, the sad reflection ending this blog post is that to a certain extent, it is impossible to guard oneself against horrific incidents such as the one that has befallen Norway. Changing Norway to "make it more secure" by limiting the mobility of our politicians, our royal family, ourselves - that would be changing Norway for the worse. When walking around downtown Oslo Saturday night, I felt frightened and unsettled at the sight of military everywhere. The Norwegian military had taken over for the police in guarding the Parliament, Royal Palace, and the explosion sites.
Today, the military is gone. Our extraordinary openness  (as the BBC notes) cannot be compromised. We shall retaliate with more democracy, more transparency, more openness.
As Stine Renate Håheim, survivor from the island, said, "If one man can show so much hate, think how much love we could show, standing together." 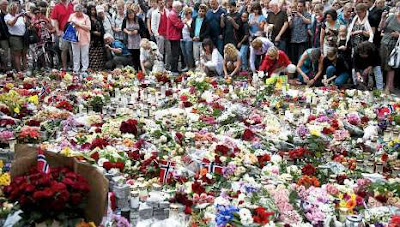